You are here: Home » Uncategorized »

26 girls competed in the All-Girls Tournament and 10 chess players, including CFCA students and parents and Tucson Mayor Jonathan Rothschild participated in the simultaneous exhibition. 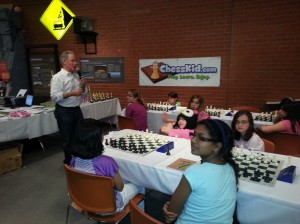 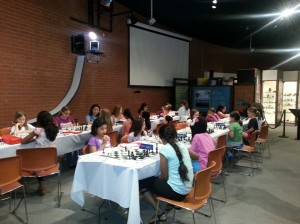 CONGRATULATIONS TO ALL! You can see the detailed results and new ratings at: http://www.uschess.org/msa/AffDtlTnmtHst.php?A6038416

Click on links to see pictures published by Arizona Daily Star  and those, taken by me and posted on Facebook .

There was a TV – KGUN9, that interviewed kids and parents. The video should be out in a few days.

Mayor of Tucson – Jonathan Rothschild, has attended the event, played in the simultaneous exhibition against Brian Belakovsky and addressed participants of the All-Girls Tournament.

All kids and parents were fed, due to the generous sponsorship of Math Department, UA (special THANKS to Professor Sergey Cherkis from Math Department!).

Every child received a trophy, certificate and a prize!

Bruce Bayly’s Physics Factory Bus, The Arizona Mathematics Road Show, Math Cats, Astronomy Club and Women in Physics presented physics, math, astronomy and other science activities to the tournament participants and other visitors, encouraging their future involvement in those areas. Their participation was an important part of Chess & Science Festival and was greatly appreciated (special THANKS to Dr. Brenda Frye from the
Department of Astronomy, who was instrumental in getting all the parties together and in setting up Flandrau Planetarium as the venue).

We are planning to host this event annually and increase its significance in Tucson life in the years to come, promoting girls’ involvement in Math, Science and Chess activities.

Again, we’d like to THANKS YOU to our wonderful sponsors, who made this event possible and hope we will have even more support in the future!